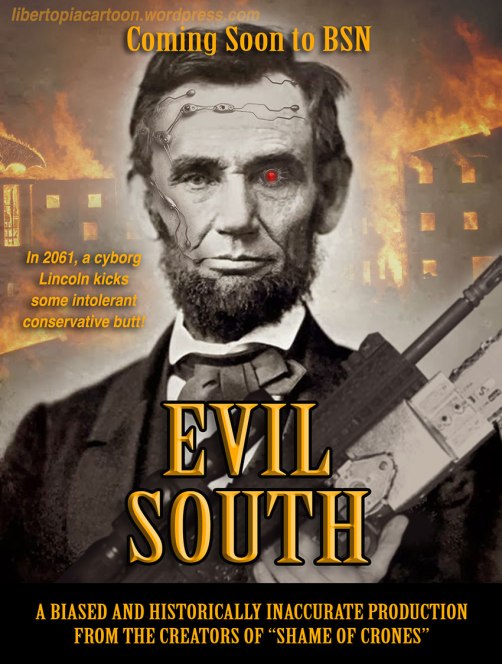 Galactic Imperium News Service: Not to be outdone by David Benioff and D.B. Weiss’s brilliant idea for a new post-Game of Thrones show exploring the drama and high-stakes tension of an alternate America where slavery still exists (which can be read here and here), Keltag Hagrinax and J.X. Parnohack of the hit series Shame of Crones also recently unveiled details of their new show at the GINS Media Summit. The sci-fi action epic, which will be called Evil South, is planned to release on the BSN Network at about the same time as Benioff’s and Weiss’s Confederate.

“Like Confederate, our show will also depict an alternate reality of the United States where the South has successfully seceded and slavery exists,” Hagrinax and Parnohack explained. “However, where our show is different is that we’re actually setting it in the year 2061. A post apocalyptic South where a conservative theocracy is oppressing and enslaving all races – as well as LGBT peoples, will be at odds with a utopian Communist North where freedom, peace and love prevails. After a series of terrifying incidents along the Mason-Dixon line, a cybernetic Abraham Lincoln and a genetically super-engineered William Tecumseh Sherman, with built-in flame thrower of course, will be resurrected in order to fight a third American Civil War.”

“We actually think our show will be much more socially relevant than Confederate, as we will seek to incorporate everything you learned in public school about why secession is evil, why confederate veterans monuments are wicked, why the south is terrible and how Abraham Lincoln was the glorious savior of humanity,” Parnohack stated. “And like what happened in the 1860’s, we also think that we’ll make a compelling case as to why it’s necessary for the Northern State to wage a campaign of extermination and destruction in 2061 against the men, women and children of the South.”

“I think the media and entertainment really have a duty to keep hitting people over the head with our take on these themes, especially in our harshly divided society,” Hagrinax said with a smile. “Like in Steven Speilberg ’s Lincoln, Gary Ross ’s Free State of Jones, Quentin Tarantino ’s Django Unchained or even Margaret Atwood ’s The Handmaid’s Tale, it’s not really about historical accuracy or being unbiased. If you wanted that, you’d check out historians like Thomas J. DiLorenzo ’s The Real Lincoln or Brion McClanahan ’s books and podcast. Rather, Evil South and other works like it are about shaping people’s thinking along the lines that Hollywood and the Establishment believes is the correct way to think. If that causes even more tension and animosity amongst people, then perhaps the State really does need to step in and force people to do what WE want them to do.”

Note: This post is a work of parody or satire. Thoughts about statism, leftism, propaganda in entertainment, historical inaccuracy or revisionist history? Let us know in the comments!

Want more from the Galactic Imperium News? Check out: